When you build a home, windows are an important aspect in its design. Most home owners think about windows and they think about two basic functions: Provide a view to the outside and let in light. Depending on where you live a third function could be ventilation. But windows are much more complicated than that. There are many styles of windows: double hung windows, single hung windows, casement windows, picture windows, bay windows, etc. There are different types of glass such as annealed, tempered, fire rated, and Design Pressure (DP) glass. Then there are energy efficiency ratings. The mystical R and U values many home buyers hear about but few understand. Let’s decode the world of windows!

Some of the Many Window Types

There are many windows types that can be used in ahomes design. Here are just several of the most common.

Double hung windows are the most common window in America. These windows have been in homes since Medieval times. This type of window is made up of two sashes. A sash is a frame or panel that holds the glass. If it is a double hung window, both sashes will move up and down. If it is a single hung window, typically only the bottom sash moves. Double hung windows allow you to lower the top sash and let hotter air out of the home helping to better ventilate without using air conditioning. Because of less moving parts, single hung windows typically cost less to buy. Each sash is commonly divided into smaller sections called “lites” or panes. In the early days glass was fragile and expensive. By creating smaller panes of glass it was wasn’t as susceptible to breaking and was cheaper to fix when it did. Now days, they are primarily decorative.

Casement windows are easily recognized because they open outward, allowing light and air into the building. When closed, casement windows create a tight seal for better energy efficiency. Casement windows are easier to operate because they incorporate a slide rail mechanism that carries the weight of the window. This type of window is more common in newer homes, in chalet style homes, and in the western part of the United States. They’re a great choice for above cabinets, counters, or areas where they can be cranked outward to open.

Picture windows are best in areas where airflow is not important. These windows are fixed, meaning they don’t open. Picture windows are often installed high on walls and hallways. They can be mounted between other operating windows to provide both ventilation and light. By themselves they provide rooms with excellent natural lighting.

Bay windows are a great way for architects to create angles and projections on the exterior of a home or building. Bay windows allow light to enter at different angles. In addition, a bay windows’ lateral panels can be opened to create airflow. They are great at adding dimension to a flat wall and provide the opportunity for various architectural enhancements.

There are Lots of Glass Types

Most home buyers don’t understand that there are many types of glass. Building codes specify the type of glass that can be used in a home and were specialty glass has to be used. Things such as a home’s location, its proximity to other buildings, or even a windows proximity to stairs or a shower can require a different glass adding to the cost of a home.

Annealed glass is the standard glass you see in most windows. The annealing process improves the glass’ durability and helps to reduce internal stresses that could result in breakage. Annealed glass may also be referred to as non-tempered and/or float glass.

Many accidents and injuries in the home are related to breakage of glass in windows and doors and are typically attributed to failure to see the glass; slips and falls; and intentional breakage. Most types of standard annealed glass will break up into large shards upon impact which can cause serious injury and (in some cases) death due to excessive blood loss.  Safety glazing was developed to prevent such serious injury in the event of impact and breakage of glass. One type of safety glass is laminated glass and is typically used in commercial projects. For residential construction, tempered glass is commonly used. Tempered glass is four times more resistant than standard annealed glass and will break into small cubes (rather than large shards) which will minimize significant injury.   Tempered glass can be identified in two ways.  The most common way to determine if the glass in a window or door is tempered is to look for a white etched “bug” at one corner of the glass.

RELATED: THE DEVIL IS IN THE DETAILS

Design Pressure glass is typically used in high wind areas or areas susceptible to hurricanes. DP testing requires that all variations of door and window units be tested and engineer approved by calculation based on previous test data. You may see a rating on a window such as DP 50. This means that the door or window is subjected to extreme testing conditions that simulate hurricane force winds up to 173 mph.

Fire-rated glass has been tested to act as a barrier to the spread of flames and smoke, a practice known as compartmentalization. The framing and glass undergo independent testing from such organizations as Underwriters Laboratories, where a fire is ignited and the temperature (which can be as high as 1,000ºF after only five minutes) is measured on the surface of the glass. Ratings are given based on the length of time the glass remains intact. The test concludes by blasting the heated glass with water from a two-man fire hose to determine the system’s ability to withstand impact pressure and its resistance to thermal water shock. Fire-rated glass ratings range from 20 minutes up to three hours, depending on the product and framing system.

U values are most commonly displayed on windows and doors of a home. You will find it on the labels required to be affixed to each of those products. U is simply the symbol for internal energy. The U value of a building element is the inverse of the total thermal resistance of that element. The U-value is a measure of how much heat is lost through a given thickness of a particular material but includes the three major ways in which heat loss occurs – conduction, convection and radiation (Air infiltration is managed by the home’s thermal envelope).

Getting Windows Right With Modular Construction

The final aspect of windows is a proper installation. No matter how good a window is, if it isn’t installed properly it will leak air and water into your home. Modular construction means every home is built following a standardized process with built in inspections. Your home is built better and is more energy efficient than can be achieved when building outdoors. Do your research and learn why Modular Means More! 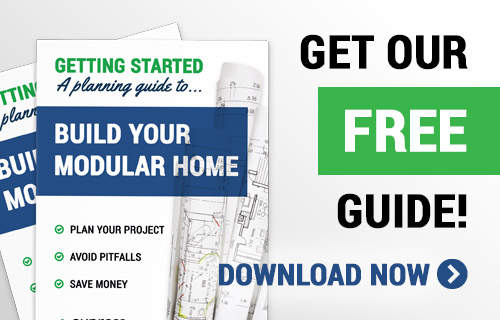