In the last 25 years, there are four devastating storms that come to mind for most: Hurricane Andrew in Florida, Hurricane Katrina in Louisiana, Superstorm Sandy in New Jersey/New York, and now… Hurricane Harvey in Texas. Each of these storms has tested the people that were affected and tested the nation in supporting them. Hurricane Andrew, in 1992, set in motion a series of events that brought homes built using modular construction to the forefront. FEMA created and published a key study that determined modular homes weathered that storm better than their site built counterparts. This finding propelled modular homes into a key position for future disaster recovery efforts.

Hurricane Andrew and the FEMA Study

Hurricane Andrew made landfall at Homestead, FL on August 24, 1992. The utter devastation created by Andrew was isolated to a narrow region of South Florida due to the compact size of the storm. However, that narrow path of devastation carved by Andrew was tremendous and deadly. There was a total of 65 deaths attributed to the storm. Andrew left about 150,000 to 250,000 people in South Florida homeless. Approximately 600,000 homes and businesses were destroyed or severely impaired by the winds, waves, and rain from Andrew.

On December 21, 1992, FEMA completed and released a study of homes destroyed to determine why so many homes just disintegrated in the face of the winds from Andrew. What they found was telling. A quote from the report:

“Overall, the relatively minimal structural damage was noted in modular housing developments. The module-to-module combination of the units appears to have provided an inherently rigid system that performed much better than conventional residential framing. This was evident in both the transverse and longitudinal directions of the modular building.”Building Performance: Hurricane Andrew in Florida Observations, Recommendations and Technical Guidance Federal Emergency Management Agency, December 21, 1992

Thirteen years later, Hurricane Katrina became the fourth strongest hurricane on record. What made Katrina different from Andrew was the flooding. Andrew caused most of its storm damage from wind while Katrina delivered its most devastating impact through water. Overall, Katrina is estimated to have destroyed 239,000 homes and cost $125 billion in damages.

The regions that were targeted by Katrina were poorer sections with older homes that were in flood prone areas. These homes were never modified to handle the dangers of severe flooding or the wrath of a hurricane. Much of the delay in rebuilding was due to FEMA trying to determine new requirements for building homes. Base flood elevations were being re-established while residents were trying to rebuild. Home sites set dormant for months and years while determinations were made about how high replacements homes needed to be.

With base floor elevations established, new and higher heights were required to build a home. This created a perfect opportunity for modular construction. It is expensive to build homes high on pilings or piers. Equipment is needed to lift materials higher and it takes more time to delivery. Modular homes require a crane to lift the mostly finished modules to their new locations. Higher heights add no more to the cost of construction and installation of the modules in a modular home.

With more than 125 deaths and $65 billion in damages, Sandy became the second most costly storm in U.S. History. Sandy primarily hit the expensive coastal areas of New Jersey and Long Island, New York. Modular construction for custom homes was just starting to become popular in these areas already for several reasons. One, the coastal areas of New Jersey and New York are expensive. Not only expensive to live in, but also expensive to build in. Modular homes provide a lower cost way to build in these high costs of living areas.

The second reason is their proximity to Pennsylvania and the dozens of modular home factories that reside there. The lower cost of living and the quality work force that is found near the factory locations are a key reason why modular homes are popular through the northeast. A third reason is building seasons. This issue is two-fold. The impacted areas in New York and New Jersey are in areas with winter climates meaning there are times in the winter that construction is slowed or stopped. They are also in tourist areas where there are typically moratoriums imposed so that no construction can take place during the summer. This allows a very limited build time. With the offsite construction process of modular homes, more homes can be delivered to the affected area within the limited construction windows.

Much like with Katrina, those affected by Sandy had to suffer the long waits for FEMA to reestablish base flood elevations. Being in a wealthier area, most residents had floor insurance. What they didn’t realize is that most were drastically uninsured for their loss.  Finding temporary housing, dealing with red tape, and surviving after the storm takes its toll on residents. Because it is typically faster, and once the red tape was cut, modular construction became the preferred way to rebuild in the Sandy affected areas. Modular homes had finally reached their potential in supporting homeowners to quickly, and once again, take residence on their property and in their community.

At current projections, Hurricane Harvey is predicted to dwarf both Hurricane Katrina and Superstorm Sandy for destruction. At an amount estimated at $190 billion, it will take years and years to rebuild and recover. Recent reports say that only 15-20% of residents have flood insurance. The next step is for FEMA to evaluate the areas. There will be adjustments to base flood elevations and these adjustments will take months and months to be established.

At present, the residents are doing what everyone in a disaster does. They are working on surviving. Family, food, and shelter are the top priorities. Soon their attention will turn to their home. The residents will once again be looking for cost effective ways to help them rebuild their homes just as quickly as they can so they can return and rebuild their communities. Texas Strong will be the motto for the area for years as they recover from Harvey.

Modular Homes Play a Key Role in the Rebuild Efforts

Building on the lessons learned from the previous three large disasters, modular homes will be at the forefront in the rebuilding efforts. Texas has a “get it done” attitude and the people there have strong community ties. Once FEMA has established the new building rules in the flood prone areas, construction will begin in earnest.

As conclusively demonstrated by Superstorm Sandy, modular homes can be the key to recovery. With flexible design and strong construction, modular homes can be delivered at a value that will be hard to match in the disaster stricken area.  The FEMA report after Hurricane Andrew propelled modular homes into a key position for future recovery efforts. Not only will those affected by Harvey recover more quickly; a better, stronger home will be protecting them from the next storm. Hopefully, they will never experience going through the same devastation again! 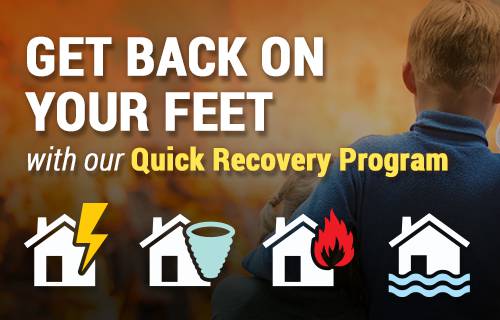